Finding the way towards the eradication of therapy-related myeloid neoplasms

Therapy-related neoplasms are directly caused by the drugs used to eradicate a previous cancer. It is well known that a subset of drugs designed to kill cancer cells through DNA-damage-induced apoptosis can intrinsically, as secondary effect, cause DNA-damage in other cells, thus inducing a neoplasm. Those neoplasms have especially bad prognosis. Why are these drugs still in use? Because for many diseases we do not have anything better, at the moment.

Approximately 0.5-1% of the kids treated for various types of cancers develop a therapy-related myeloid neoplasm (tMN) as a result of the treatment. Despite having the same origin, their prognostic and molecular features are different from the adult ones, and a complete understanding of the pathogenesis of tMN in children is still missing. 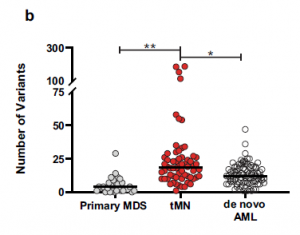 A total of 84 paediatrics neoplasms have been profiled by either Whole Genome or Whole Exome sequencing by Jason R. Schwartz and his colleagues, in a collaborative effort guided at the St. Jude Children’s hospital, in Memphis. They identified a mean of 28 somatic mutations per patient, a number which is significantly bigger than the number of mutations found in paediatrics primary neoplasms, as depicted in the original paper´s figure 1b, shown here. Their sequencing data identified that Ras/MAPK pathway mutations, alterations in RUNX1 or TP53, and KMT2A rearrangements as the most frequent drivers of the disease. Clonal evolution analysis (the comparative study of the behaviour of cells harbouring different mutations) highlighted that, unlike in adults’ tMN, there were not pre-existing leukemic clones, and virtually all mutated cells were found arising as a direct consequence of cytotoxic therapy. This represents yet another important difference between adult and paediatric tMN. This important study have been published in Nature communications in February 2021.

The sequencing data have been deposited at EGA under the study number EGAS00001004850. Thanks to this, other researchers around the world could re-use it to uncover more information, integrate and validate their studies. Revealing the molecular features underlying the development of cancers is the only way towards the development of new generation targeted therapies, which will allow us to finally drop the cytotoxic drugs eliciting such unwanted and catastrophic secondary effects as tMN.

It is not an overstatement to say that, while improving the treatment of primary tumours, we could entirely eradicate therapy-related neoplasms right from their origin. Looking forward.

Next post Advancing fast in the analysis of circulating tumour DNA

Previous post 20 years after the first human genome release, where are we heading?