It has been already several years since we discovered that microbial therapeutics like Faecal Microbiota Transplantation can be used to treat Clostridium difficile infection (CDI) and Inflammatory bowel disease (IBD) with great success. The concept has challenged us to test the limits of our knowledge with the perspective to improve health in the most diverse conditions like Parkinson disease, depression, autism and obesity, just to mention a few. 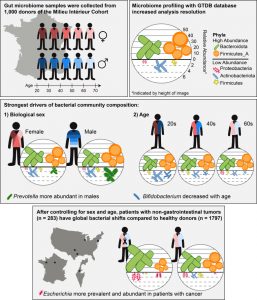 Allyson L.Bird and colleagues from Genentech Inc. (San Francisco) recently published an interesting study building up on the key concept that “As microbial therapeutics are increasingly being tested in diverse patient populations, it is essential to understand the host and environmental factors influencing the microbiome.”

The authors of this work analysed 1359 gut microbiome samples using shotgun metagenomics sequencing.  The results of the comparison done between microbiota composition across the different groups showed that biological sex is the strongest driver of diversity, while aging (age range studied: 20–69) appears to be the second factor. As smartly outlined in the authors’ own graphical abstract (figure to the left), Bacteroidota species consistently increased with donors’ age while Actinobacteriota species, including Bifidobacterium, decreased.

This study also integrated data from oncological patients to draw cancer-related evidences. After correcting the biases for technical and geographic differences, they found that cancer patients show significantly altered gut bacterial communities compared with their healthy counterparts. Eg. E.coli was found to be increased in cancer patients together with Bacteroidota/Firmicutes ratios. By comparing sequential samples taken from the same donors (413) within short-distance time points, the authors found that in the short term, intra-individual differences were less than the inter-individual ones, indicating a certain community stability being the norm.

One of the pivotal points from this interesting study is that the data proceeds from extremely well-defined and selected donors. Specifically, the data for 949 selected healthy donors came from the Milieu Intérieur (MI) Consortium and extensive metadata, including demographic variables, serological measures, dietary information, and systemic immune profiles, are available.  This precise stratification allowed for the robust detection of smaller changes, compared to former works. All sequencing data has been deposited in the EGA archive under the accession number EGAS00001004437.

Enjoy this amazing open access paper published in the Experimental Journal of Medicine on January 2021!

Note: the figure belongs to the original paper and is owned by the authors.