Tumours of different types may arise from a single cell with at least one malignant mutation. Accumulation of subsequent hits generates lineages of cells with different cancer transformation power; thus, every clone follows an autonomous evolution, and several clones may co-exist into the same solid or liquid tumour.

Clonal evolution studies are not new: the conceptual power of this approach has been recognized since the early ’80, especially in leukaemia patients. Nonetheless, these studies greatly benefit from recent technological improvements -machineries and protocols-, which enable ever-increasing sequencing depth, allowing the detection of low frequency variants and consequently more tumour clones. 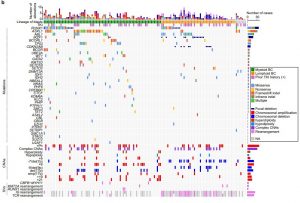 Researchers at the University of Kyoto in Japan, have indeed used state of the art knowledge to investigate the clonal evolution of chronic myeloid leukemia (CML) in a large panel of patients. CML progresses from a majoritarian benign chronic phase into an often fatal blast crisis phase. It is nowadays known that blast crisis are triggered by genetic instability and disrupted DNA repair, which lead to accumulation of DNA mutations. The use of thyrosine kinase inhibitors targeting the Philadelphia chromosome have enormously improved the treatment of blast crisis, nonetheless resistant patients are still a medical challenge. Yotaro Ochi and collegues used Whole Exome Sequencing of paired chronic phase and blast crisis samples to depict the genetic landscape of progression from the first to the second stage of the disease (as illustrated in their figure). Their results were published in Nature Communication on this May 2021. They used a dataset previously deposited at the EGA (EGAS00001003071) and their new generated data have been made available under accession number EGAS00001005075. Their analysis of the occurring mutations contribute to understanding the mechanisms of CML evolution and therefore develop a protocol for early management of patients with a TKI resistance signature.

Up to date, the EGA hosts 99 clonal evolution studies, developed in several cancer types, including myeloma, renal carcinomas and ovarian cancer, in addition to various leukaemia subtypes, where this approach has been more widely applied and produced important results and seminal papers. From a pan-cancer point of view, the definition of tumour architecture through clonal evolution studies is instrumental to unravel the mechanisms of disease progression and treatment-resistance insource.  At the EGA, we are honoured to contribute to exciting and important science advances with our service!

Note: the figure belongs to the original paper and is owned by the authors.